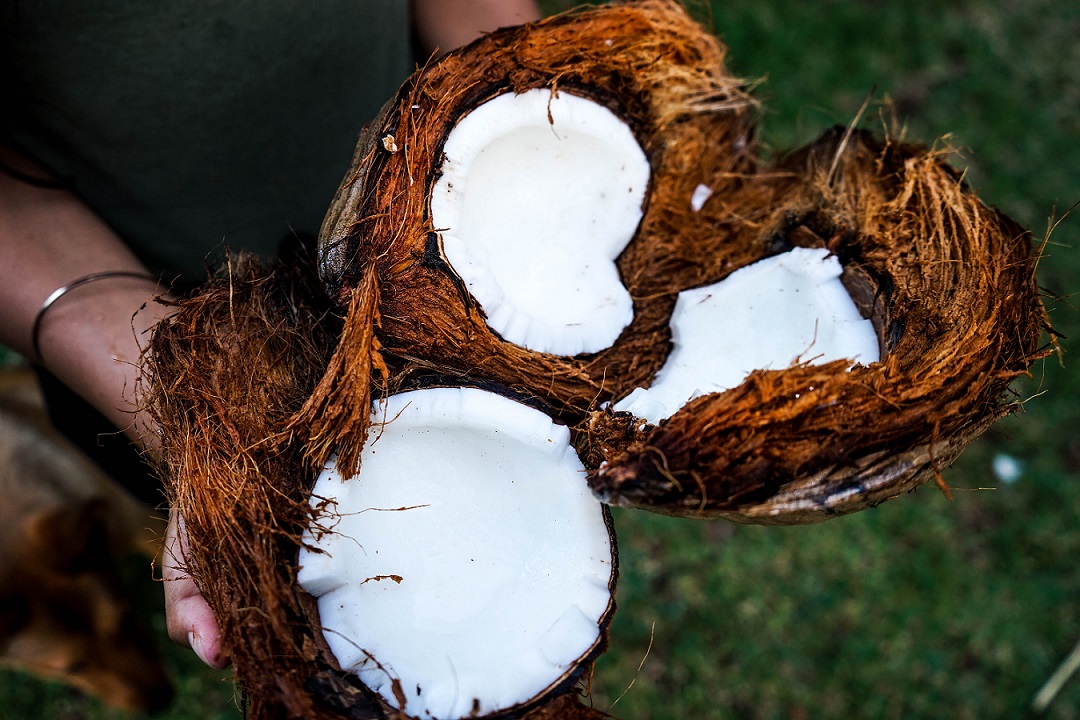 7 Reasons why you should love coconut oil

I’ve been writing about coconut oil for so long – since before it got its own publicist! I wrote about the benefits in my first book Imperfectly Natural Woman published in 2006 and since then its been in favour with celebs oil pulling et al…and out of favour, with scientists trying to tell us its bad for us.

I haven’t changed my view!  It is actually one of the healthiest oils you can consume. Here are the top seven reasons why you should use coconut oil as an alternative to other common cooking oils.

Unlike many other common oils, like soy (vegetable) and corn, coconut oil won’t make you fat. Coconut oil contains medium-chain triglycerides (MCT), which are an easy fuel for the body to burn, without turning to fat. Most other cooking oils and fats contain long-chain triglycerides (LCT). LCT’s are usually stored as fat. Since coconut oil is a MCT, it is more easily absorbed and converted to energy quicker.

People in the tropics have relied on coconuts as a traditional staple in their diet for centuries. They consume large amounts of coconut oil every day. Instead of getting fatter, it helps them stay healthy, lean and trim. When they switch from coconut oil to our modern oils, they develop obesity and the health problems that our modern society faces.

Some other people who have known this truth for a long time are people who are in the animal feed business. When livestock are fed vegetable oils, they put on weight and produce more fatty meat. When they are fed coconut oil, they become very lean.  Unlike many other oils it doesn’t degrade at high temperatures so its perfect for cooking. (more on that later)

Coconut oil may triple your calorie burn. Since coconut oil is a MCT, it is converted to energy so quickly that it creates a lot of heat. In a study published in the American Journal of Clinical Nutrition, MCT’s burn three times more calories for six hours after a meal than LCT’s.

The February 15, 2005 issue of Woman’s World magazine stated that coconut oil is the “underground high-metabolism secret.”

This is great news for people who have thyroid problems, since coconut oil improves sluggish thyroids by stimulating the production of extra thyroid hormones. Most other common oils, like vegetable (soy) and corn have been shown to inhibit thyroid function.

Most cooking oils contain omega 6 fatty acids, something we get way too much of. Our omega 6 to omega 3 ratio should be 1:1 but it is more like 50:1. We need to drastically cut back our omega 6 oils and consume much more omega 3 oils to be healthy. And coconut oil is filled with these healthy omega 3 fatty acids.

Because of the healthy omega 3 fatty acids and the fact that it increases the metabolism, most people that switch to coconut oil feel a burst of added energy in their daily life.  This is because coconut oil is nature’s richest source of medium-chain triglycerides (MCT’s), which increase metabolic rates and lead to weight loss. MCT’s promote thermogenesis, which increases the body’s metabolism, producing energy.

Many people with chronic fatigue syndrome and fibromyalgia have found that adding coconut and coconut oil to their diet was helpful to them.

Coconut oil is one of the best things you can apply directly on your skin and hair. It gives temporary relief to skin problems like rashes. It aids in healing and restoring skin to a younger appearance. It has also been known to help with people who suffer from yeast infections in the skin, as well as many other skin problems.  Just use a teaspoon full as you would any other body oil. Its an excellent deep intensive hair conditioner, just apply to damp hair, you can sleep with a towel or bathcap on, and rinse through a couple of times the next morning.

Not only does it soften and smooth your skin, coconut oil has antioxidant properties that protect the skin from free radical damage. Coconut oil makes excellent massage oil too.

Evidence is mounting that coconut oil has anti-fungal, antibacterial and antiviral effects when both consumed and used topically on the skin.

You may also be fascinated to read about its impact on memory and energy levels. Check out the blog post on the Tiana Advanced Memory Oil

It has a higher smoke point than olive oil, which means it can take higher temperatures better. There are several healthy omega 3 oils we can choose to consume, such as flax and olive oil, but they don’t do well under the high heat we use for cooking. Coconut oil can be used in higher cooking temperatures.

It is harder for coconut oil to go rancid, unlike other cooking oils, which are usually rancid long before you even bring them home. Rancid oils cause free radical damage in the body, which is a leading cause of cancer. Coconut oil is stable for over a year at room temperature.

Because of the misinformation we have been given for years, we have lost out on the healthy benefits that coconut oil has given the people of the tropics for centuries. But now it has been rediscovered! Coconut oil is so effective, its high in lactic acid -the main component of breast milk – so super good for you.

Be careful of the quality though, you get what you pay for, some coconut oils start life as powder, or milk. I like the products from Tiana, which are raw organic cold pressed and extra virgin. 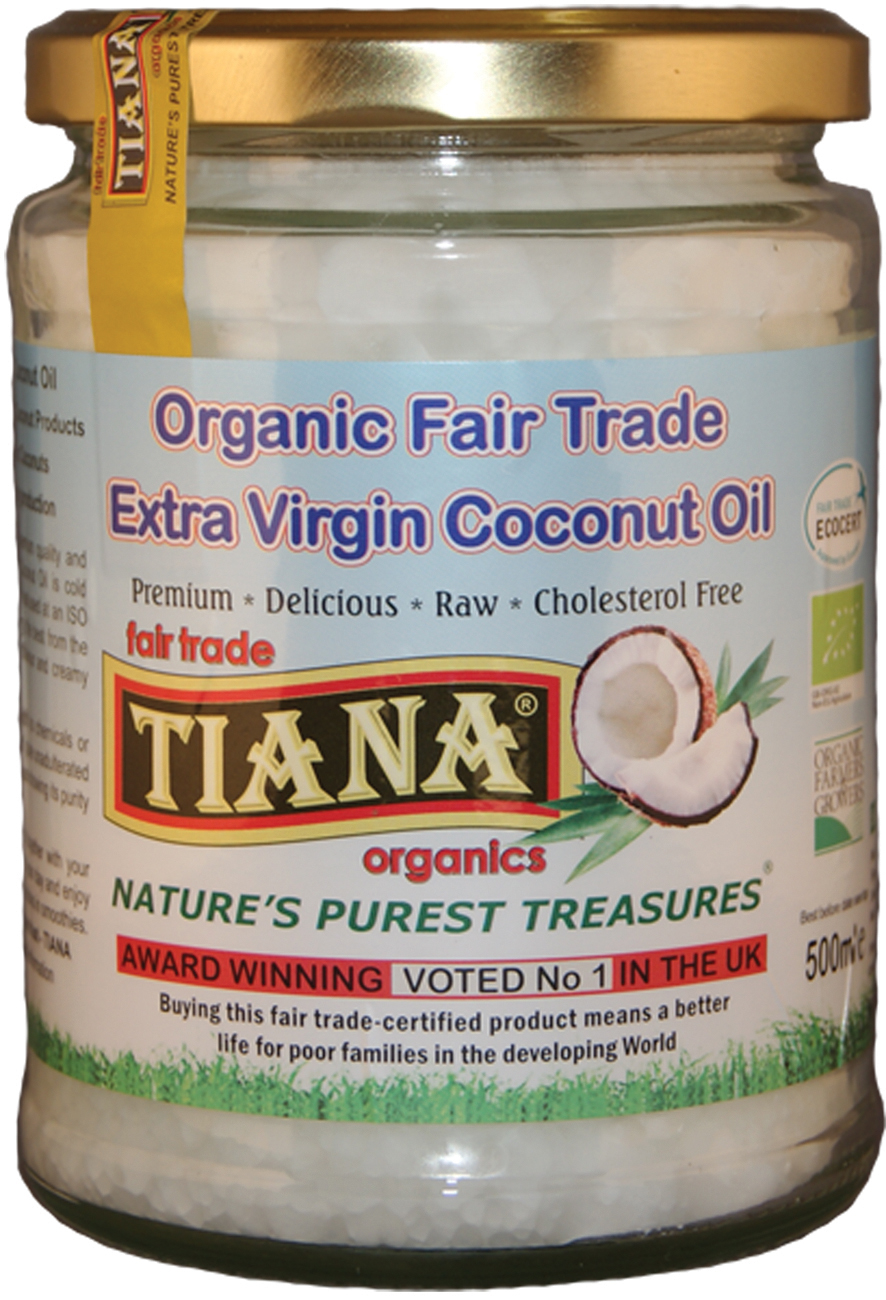 How to use it.

Some ways to consume it…Cook with it, its perfect for frying, or for adding to curries et al. You might also love the Coconut Butter from Tiana Fair Trade Organics, which means you don’t even get a coconut aroma or taste.

Add a spoonful to a smoothie, or to your coffee to make it creamy and super-charged!  I also like to add it to a cacao drink, I use good quality raw cacao high percentage cacao with gently heated plant based based milk