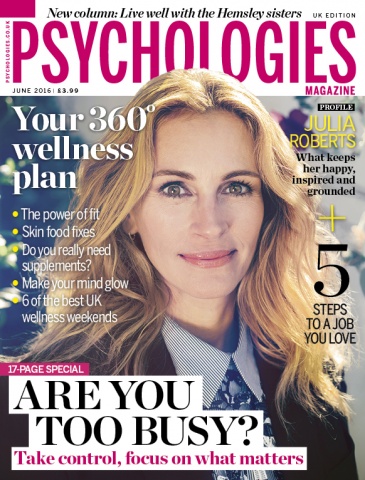 Lovely to see Julia Roberts gracing the cover of Psychologies magazine, the interview is inspiring too, revealing a woman who is at peace with herself, choosing her roles carefully and absolutely puts her family first. This tallies with my experience of meeting this world famous Hollywood actress, it was during the promo period for Eat Pray Love, I had been entranced by the book so was a little nervous about seeing it on the big screen, I wasn’t disappointed though, I thought the casting was terrific and Julia a most convincing Elizabeth Gilbert,  who as the author she must have been thrilled that Julia was chosen to play out her life story.

After the screening I had to go along to the junket to record an interview for BBC Radio 2. For anyone not in the media a junket is where the film company set up in a hotel or conference centre and bring the UK’s press, TV and radio to them. The journos and interviewers wait in a lounge being offered copious amounts of coffee and then eventually are taken through to meet the star (yes it really is like the Hugh Grant scene in Notting Hill and the star usually does have to answer the same questions over and over.)

The film PR people are usually fiercely protective of the stars,  they are only brought into the space at the last minute and it’s not the done thing to talk about anything other than the movie they are currently promoting, they hold you to time too, you’re lucky if you get four minutes and someone stands usually behind the star, counting you down, making frantic throat cutting gestures if you do thirty seconds over…tricky if the celeb is in the middle of a long sentence!

Anyway I was delighted be able to interview Julia, I was ushered into a corridor then asked to go into the hotel room designated for interviews. I was surprised to see it was just a normal hotel suite not decked out with cameras or hoards of people so I assumed this was another room and I would eventually get to go through to meet Julia. As I entered the room I saw what looked like a young woman curled up on the couch, bare feet on the chaise lounge relaxing, I  assumed it was the runner and she was taking a break. I approached and put my hand out…’Hello I’m Janey from BBC Radio 2 here to interview’…..suddenly she leapt from the couch and with a dazzling smile introduced herself, ‘I’m Julia  how lovely to meet you’…(I’d grasped that by then!!) she proceeded to comment on my jewellery (I was wearing a lovely Tatty Divine piece) and we chatted as if we were old friends.

Once on the microphone we talked about the movie and I got the feeling that she genuinely loved the role, we laughed about ‘The Medicine Man’ suggesting that we ‘smile with our liver’, and I always remember that when I see photos of her smiling.  In the Psychologies article it describes her as having ‘a new confidence and power, hard earned through grit and determination and a enduring belief in herself and her values’.  She has stated previously that she is a deeply happy person, she said ‘as life goes on, you realise what great fortune that is’.

What a thing! A real down to earth genuine celeb who can teach us all a thing or two about happiness