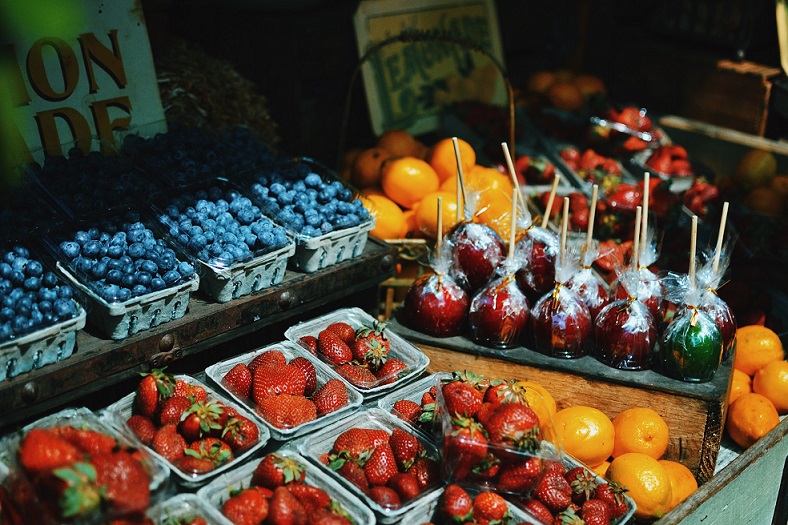 It kicked off one heck of a Social Media storm recently when headlines told us we should be eating not five, but ten portions of fruit and veg daily. New research done by Imperial College London says we should double the current advice and the intake should be 800g a day (or ten portions of fresh fruit and vegetables of 80g each).  It’s thought this could prevent over seven thousand cancer deaths and almost fourteen thousand people from strokes every year. Radio presenters, columnists and the whole of Social Media was awash with people claiming it was impossible and unrealistic, also very expensive.  I beg to differ, to me its spot-on advice. There are some tribes who live to a ripe old age whose diet is so intrinsically packed with vegetables they would lose count. It’s really our habit of seeing vegetables as a side dish and fruit as an expensive snack that is the problem, if we recognise that a vegetable meal can be a meal of its own merit, it becomes easier.

By far the quickest way to health is to ‘drink’ your veg, if you start the day with a smoothie or fresh juice it becomes second nature to be taking in at least ten portions throughout the day. Using a juicer (dig it out of the cupboard or get a second hand one) Juice a small apple or carrot as a base, add a handful of spinach or kale, florets of broccoli, a chunk of fennel and a quarter of a lemon – serve over ice. That’s a nutrient packed liquid fuel giving you an antioxidant boost.  If you prefer a smoothie you can blend together frozen berries, banana (or any soft fruits) add some live yoghurt, some nuts and seeds, even some oats for a filling breakfast.

The other obvious thing for adults as well as children is to ‘sneak’ the veg into your meals.  By that I mean cook from scratch and add veg to everything. A typical day could be breakfast of poached egg with spinach, (and a fresh fruit and veg juice).  Lunch could be an avocado or tuna salad, snack on an apple, satsuma or banana and a handful of nuts, and even if you love your traditional meat dishes, if you’re making spaghetti bolognaise, make your own sauce and add fresh tomatoes, onions, garlic, celery, carrots, (any veg really because it can be blended in) and add a raw side salad too. If you want to be really traditional, finish up with apple crumble – viola – at least ten portions.

I don’t buy the affordability argument either, of course it’s going to be more beneficial if we can source seasonal and organic fruit and veg, grow your own wherever possible and use delivery services or local farmer’s markets, but if you are on a tight budget, any is better than none. If you can get to a street market, they almost all have a wide variety of fruit and veg for one pound a bowl.  Definitely cheaper than junk food, and preferable to the hospital food you could be eating if you don’t manage close to the ten! If you want to be further convinced, check out the brilliant documentary ‘Superjuice Me’. Jason Vale, the Juice Master, believes that no other subject has been more over-complicated than diet, nutrition and disease and that it’s time for people to take back their health. At his Juicy Oasis retreat in Portugal, Jason and his team (which included medical experts) tested his theory that chronic disease is caused by toxicity and nutritional deficiency, and that the best way to treat disease is simply with high quality nutrition. He took 8 people with 22 different health conditions and put them on nothing but freshly extracted juice for 28-Days. The results were incredible. Totally inspirational. I defy you to watch this movie and not start introducing more fruit and veg into your daily regime. If you are new to juicing, initially you should probably start with simple juices – fresh apple juice is a world apart from the cloudy cooked stuff in cartons!

Next try ‘lemon ade’ – well, it’s ‘apple ade’ really. Simply pop in 1 apple, 1 chunk of lemon and another apple. (The Pink Lady or Gala apples work well.) Juice the lot and serve over ice, it will be a huge hit with the kids!

Apple, carrot and ginger is another simple favourite. Simply ‘sandwich’ a couple of chunks of carrot with a slice of ginger between two apples, juice and serve over ice. You can add lemon to taste.

The classic favourite, of course, is fresh orange juice. Better to juice it than to squeeze, as that way you get the nutrients contained in the pith, too. Combine with carrot and ginger and you have a winning juice.

2 apples or 2 chunks of pineapple as a base

You can replace ingredients with whatever you have – a couple of Brussels sprouts, some courgette, green pepper, pretty much anything can be juiced (apart from onions and leeks) and every veg has different health-giving properties.

Once juiced, add to a blender with a handful of sprouted seeds, a chunk of avocado and any other additions you fancy, such as a tablespoon of Tiana Coconut Oil or flax oil, or you may want to add yoghurt and chuck in three or four ice cubes, too. Whizz it all up together and serve – it makes a fantastic healthy breakfast which will keep you going for a good few hours.

Beetroot works well; it’s great for cleansing blood and regulating blood pressure. Try it with carrot and lemon (it turns everything a wonderful deep red).

Remember to add parsley to smoothies when you can. It contains B12 and lots of other nutrients. I could go on for ever! I’ll finish with one top tip for a reviving drink. This is fantastic if you feel a cold coming on.

Juice together and serve in a shot glass to down in one. Whooah, that is hot! It’s amazing for hayfever and colds.

For a more soothing late-night version:

Juice together, then add half a cup of boiling water and a spoonful of honey.