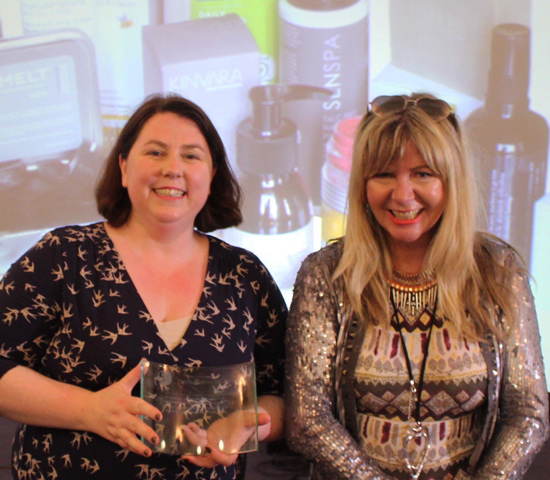 I was pleased to be able to present the ‘Free From’ Skincare Awards recently as part of the Allergy and Free From show, alongside it was the Just V show (vegetarian and vegan food and drink) and the ‘Love Natural, Love You’ show where I also gave a talk ‘Is Your Skincare Making You Sick?’

The show was massively up in numbers from previous year, some attendees were there because they have multiple allergies, some because they are really passionate about their nutrition, and others because they wanted to find out what’s hot in natural and organic products.

It’s worth remembering that just because a product is natural doesn’t necessarily mean it won’t exacerbate allergies in some people, so if you’re sensitive it’s really important to look at what’s on the label.

The ethical companies usually make a song and dance about what’s NOT in their products as well as what is, as a general rule try to avoid the main culprits, sodium laurel sulphates, parabens, preservatives and artificial fragrance.

“We feel the quality of ingredients being used in cosmetics has improved. It has been encouraging to see so many small and upcoming brands winning a number of awards too. The future of natural skincare is in good hands!”

This year Irish skincare brand Kinvara won top honours winning the Overall Award for Best Free From Skincare Product for their Absolute Cleansing Oil. I’ve yet to try this but as a rule I love facial oils and they are just as good at cleansing as they are at moisturising.

Sukin won the award for the Best Free From Achievement and there were also wins for Balmology, Seascape Island Apothecary, The Naked Skincare Company and JASON to name just a few.

What was great about the shows in general was the awareness of the ‘holistic picture’ – food, cleaning products, household items, even fabrics, as well as skincare being free from toxins.  There were some great seminars too including some fascinating info on how good skin comes from the gut, most of us simply don’t have enough good bacteria any more, which can lead to more allergies.

On that note, just after the awards my daughter was biting her nails, and up popped a news story from New Zealand where they say children who bite their nails are less likely to have allergies as adults.  It’s down to the fact that they ingest the bacteria living under their nails which builds an immune response making them less susceptible to allergies – a theory known as the ‘hygiene hypothesis’.

Eeuuw! I won’t be encouraging it…but I will try and convince them to eat some sauerkraut and drink some kefir!

YOUR VOTE COUNTS IN THE 2016 PLATINUM AWARDS

You Could WIN Natural Goodies worth over £100!

Here’s where you can see a sneak preview of selected entrants.

Each page has voting buttons for you to vote easily and quickly and you will also be entered into our draw to win a hamper of Natural Goodies worth over £100!